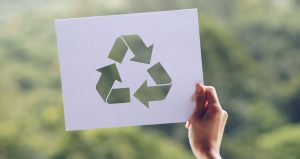 Each of us uses approximately one 100-foot-tall Douglas fir tree in paper and wood products per year. (EPA, 2008)

More than 56 percent of the paper consumed in the U.S. during 2007 was recovered for recycling — an all-time high. This impressive figure equals nearly 360 pounds of paper for each man, woman, and child in America. (Paper Industry Association Council, 2007)

More than 400 paper mills in the United States use at least some recovered materials in their manufacturing processes, and more than 200 of those mills use recovered fiber exclusively. (EPA, 2008)

De-inked paper fiber is the most efficient source of fiber for the manufacturing of new paper products; one ton of de-inked pulp saves over 7000 gallons of water, 390 gallons of oil, and reduces air emissions by 60 lbs compared to traditional virgin fiber processes. (Abitibi Consolidated, 2005)

Just over 48% of office paper is recovered for recycling. This becomes raw material for paperboard, tissue, and printing and writing papers. (Keep America Beautiful, 2006)

Over 73% of all newspapers are recovered for recycling. Almost a third goes back into making more newsprint. The remainder is used to make paperboard, tissue, and insulation, or exported. (Keep America Beautiful, 2006)

Recycled paper can also be made into paper towels, notebook paper, envelopes, copy paper and other paper products, as well as boxes, hydro-mulch, molded packaging, compost, and even kitty litter. (EPA, 2008)